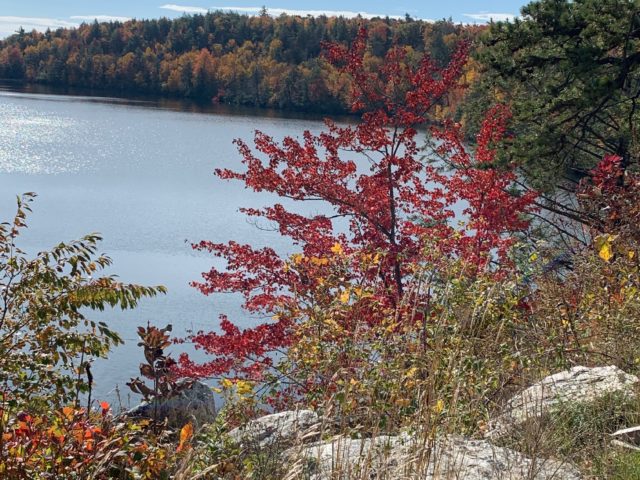 Driving around these days, I can see a lot more sky than I could a week or two ago. Lots of leaves are on the ground. While there’s still some brilliant fall color in patches, there’s a lot of brown too, and our first frost is in the forecast. So, it’s time for an update on how I did on the Fall Fun List!

(For new readers: I posted this list in early September, talking about what seasonal adventures I wanted to have to make fall feel like fall. I post seasonal fun lists about five times a year — the four seasons plus holidays — to help guide my schedule as I follow Tranquility by Tuesday Rule #6: One big adventure, one little adventure. If you want more little adventures in your life I’d suggest making these lists!)

Here’s what happened and what didn’t:

Go to Maine. I took a work trip to Portland in early September, and there was definitely cold in the air at night, which made me feel like I was ushering in the new season. It’s a lovely little town and I had a lot of fun!

Run a half marathon. I finished the Philadelphia Distance Run. I was not thrilled with my time. But I did finish. My next race will be a much more manageable Turkey Trot 5k, which I am running with my oldest kid.

See the bird migration. I suggested going to Hawk Mountain or Cape May, both of which are great bird-watching spots. We did not make it to either. The weekends just got filled up with stuff or bad weather and the kids not wanting to spend the time in the car. I’ll have to bump this to next year. (Though I doubt any of those variables will change next year…but I won’t be launching a book, so maybe I could go during the week.)

Take a leaf peeping trip. We did do this! The whole family went on a weekend trip to my brother’s house in upstate New York. We went on a lovely fall hike in Minnewaska and then went apple picking. There was a bonus stop at Starbucks in downtown Stroudsburg on the way back, and it turned out to be a very cute and autumnal town in the hills too. Some year I’m going to do a Vermont/New Hampshire fall leaf peeping trip, but I’ll probably need to make a long weekend out of that.

Go on a fall hike. Sort of… There was Lake Minnewaska, as mentioned above. I went on two bike rides through very colorful leaves, and on a short walk through a local trail. I would have liked to go hiking in the Poconos, but as with Cape May, that did not happen.

Go to a Halloween-themed event. I took the three younger kids to Dutch Wonderland, and though it was rainy they had a lot of fun. We also went to my husband’s office Halloween party. And we hosted my daughter’s 11th birthday party, which had a Halloween theme, complete with decorating pumpkins, and wrapping her up like a mummy.

Drink apple cider/go apple picking. We did go apple picking by my brother’s. As for cider, I haven’t been that excited about drinking it, but when I took my daughter to Longwood Gardens to see the lights, we stopped at the beer garden and I ordered the cider. Alas, it had a caramel flavor to it that I didn’t notice before ordering…Oh well. Maybe a better one next year. (I am more of a “dry” rather than “sweet” cider sort of person – but we have some dry hard cider at home that I haven’t drank either. It is the sort of thing I feel like I want to drink surrounded by pumpkins and hayrides and if I don’t have that it’s not going to be my Friday night choice.)

Listen to fall-themed music. I started listening to a few options, but I think I’m going to count the Faure Requiem (which I sang this past weekend with my choir) as my official fall music.

Take family photos. We got this done last weekend! The 2-year-old was in full 2-year-old form, refusing to participate, then refusing to take any photos without this giant water gun backpack on his back, a toy he had never shown interest in until the photo shoot, so I didn’t know to hide it…ugh. Miraculously some of the photos turned out quite well, though a few where we are all facing the camera I didn’t suck in my stomach and I don’t want to choose those for the holiday card and have people send me notes about whether the family is growing…No. It is not.

Celebrate the launch of Tranquility by Tuesday. I had a virtual toast the night before launch, and I had some friends and family over to the house to celebrate on what turned out to be a perfect autumn day.

Anyway, I made a lot of memories this fall, even if the season was intense in many ways, and certainly all did not go as planned. Now, onto the holidays, which will be complex as our list of traditions is long and our available time limited.

How did you do on your fall fun list, if you made one?

In other news: I was a guest on Erik Fisher’s Beyond the To Do List podcast. Please check it out.