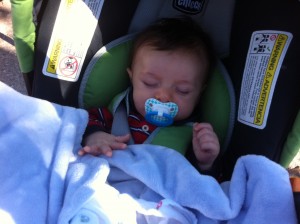 A little confession: I love my sleep. Love it. I don’t just love feeling focused and productive after a good rest (though that is nice). I love sleep for its own sake. I love that delicious feeling of sinking into dreamland, the way my brain pieces images together, and that lovely sense, on the best mornings, of drifting in and out of natural grogginess with no alarm. My baby is currently sleeping through the night roughly 5 out of 7 nights (he is a 16-lb butterball!) so I am still being diligent about getting to bed by 10 p.m. Then, the nights he doesn’t wake up at 3:30 or 4, I wake up on my own before 6, unless I just ran 10 miles (as I did on Sunday). Then I woke up at 7 on Monday – wow!

I call this statement that I often sleep enough not to need an alarm a “confession” because it’s not a usual subject of conversation. I think I have a busy life. I have four kids under age 8, including a nursing infant. I aim to work at least 40 hours per week. My husband works long hours and travels. There’s a common work/life narrative out there that if you do work, and have kids, you will never sleep. But I sleep. I’m grateful I do (there’s some family history of insomnia) but there’s also reasonable evidence that I’m not the only one.

According to the American Time Use Survey, the average working mom sleeps 8.42 hours per 24 hours. In the Mosaic Project diaries that became the basis for I Know How She Does It, I found that these women who earned $100k-plus, and had kids, slept 54 hours per week. That’s about 7 hours and 43 minutes per day, or the equivalent of sleeping 8 hours 5 days per week and 7 hours 2 days. There was some sleep deprivation, though not on a massive scale. Only 37 of the 1001 days I studied featured fewer than 6 hours of sleep.

That’s an interesting number to think about this week, as I examine faulty work/life narratives ahead of Mother’s Day. Several years ago, the National Sleep Foundation released a poll on women and sleep. The press release claimed that women who worked full time and had school aged kids were in bed less than 6 hours on weekdays. I want to be clear that the study itself did not show that. (I am not sure what happened with the press release). But that 6-hour number got repeated. Add that to a general problem with sleep surveys (people tend to underestimate, and guess at what a “typical” night might be when many people do not have typical nights) and there’s a widespread impression of sleeplessness. When Amy Sennett asked female Princeton students how they planned to combine careers and kids (as part of her senior thesis), one widely-quoted answer was “I plan never to sleep.”

But the truth is much more positive. Yes, there will be bad nights. I have had these bad nights. Some people have more than their fair share. But for the average person, these bad nights must be taken in context. In general, working mothers get a solid amount of sleep. If people take nothing else from I Know How She Does It, I hope that little nugget enters the popular conversation.

Working mothers also have leisure time. I suspect I have more than most people because I’m self-employed, I prioritize me time, and my housekeeping standards are relaxed. But the good news from the Mosaic logs is that even people with more restrictions on their time figured out ways to fit leisure activities into their lives. Most people exercised; most people watched TV. Not as much as the average American, but watching 20-plus hours weekly does not seem like a great goal. I saw plenty of time with friends, time for books and magazines, and even a few spa visits sprinkled in. None of this happened as much as people probably wished, but it did happen. Not having as much leisure time as you want is not the same thing as having none.

I think the lack-of-leisure narrative stems from something else I saw in the logs: women with kids under age 2 spent much less time on leisure activities such as reading and TV than women with older children. The time one could be spending relaxing was spent on the active physical care of kids. This makes a lot of sense if you think about it, but since we form our narratives of parenthood during those searing early years, the narratives tend to stick around even when they’re no longer so true. This is what I’m telling myself as I have plunged myself back into the baby stage. I’m getting to run with friends, and read, and get my monthly massages now. In a couple of years, I’ll have even more time for those things. And that will be awesome.

If you like my blog, you might also like my next book, I Know How She Does It. Pre-order a copy and you can join my book club, with perks including an autographed book plate, early excerpts, and access to two live webinars around launch. Thanks for reading!